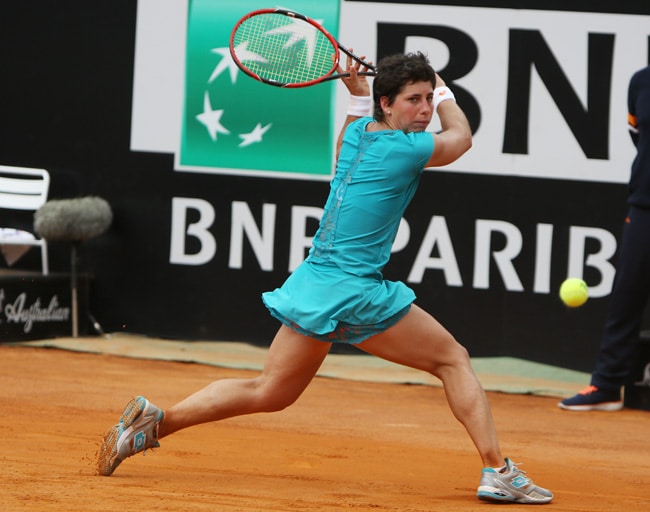 Carla Suarez Navarro was the first name through to the Rome finals as she shocked second seen Simona Halep to win 26 63 75 in two hours and 29 minutes.

The Spaniard came back from a set and a break down and despite a topsy-turvy final set which involved several breaks it was Suarez Navarro who progressed to her second final of the year.

It was arguably her biggest win as well, underlining a superb season that has seen her beat nine top ten players.

“It was really tough,” said Navarro who is now expected to rise to number eight in the world rankings. “I know that we are breaking all the time the serve but we both returned really good. We were playing really good tennis, it was tough for me and tough for Simona but I’m happy.

“I was practicing really hard during the whole seaso, maybe that’s why I feel also with more confidence. I try to play more aggressive, this is important to play with the best players.

“I want to play my best every time. To be number eight I think is a good number but it’s just a number. You have to work really hard every week.

“I’ve just changed my racket, my racket’s helped me to serve better .and to make more aggressive hits but I think the most important is also mentally.”

Halep had only lost seven games all week prior to this match and admitted the pressure got to her in this match.

“I was a little bit too nervous I think,” she said. “I lost the rhythm and couldn’t stay focused there. Good for her, every match against her is tough.

“I expected a very difficult match because her style is a bit dangerous for me, it’s not easy for me to play against her. I’ve tried everything in the end, maybe in the last game as well where like three balls of mine were very close to the line but were out. She deserves to win, she played great tennis, she was fighting until the end so she deserves it.”