Elina Svitolina remains on course to win back-to-back titles at the Internazionali BNL d’Italia after she advanced to the final with a 6-4 6-3 semi-final victory over Anett Kontaveit.

The Ukrainian has been on excellent form all week and Saturday’s semi-final was no different. While the Estonian produced more winners overall, it was Svitolina who was the more consistent player, ramping up her level in the important moments to claim the vital points and clinch a 74-minute win. 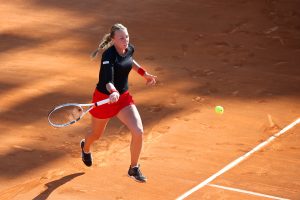 The No. 4 seed started better than she had in her last two matches, breaking in the opening game and then holding for a 2-0 lead. It looked like being a one-sided affair when the Ukrainian claimed the next two points but Kontaveit rallied to hold her second service game and then won two more games to move into a 3-2 lead.

By now both players were finding their range and cracking their groundstrokes. Kontaveit was already producing some flashy winners, including an impressive backhand down the line to help her to recover the break, but it was Svitolina who took the initiative. She changed it up, hitting an impressive volley at 3-3 30-30 to earn a break point which was duly converted and which proved to be a pivotal moment in the opening set.

The reigning champion faced break points in the next game, fending off two before extending her lead to 5-3 and then proceeded to hold off the 22-year-old to claim the first set. 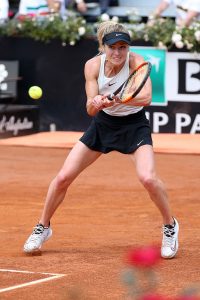 Svitolina ramped up the intensity in the second set and had an answer for everything the world No. 26 threw at her. Kontaveit was unable to put any pressure on Svitolina’s serve, making it impossible for her to recover the deficit once she was broken at 2-1. She kept within touching distance until 5-3 when Svitolina increased the pressure once again to extract another break and seal victory.

“I think I was very solid with my performance. And this was, you know, was really, really good. I’m very proud of this, that I could stay really consistent all match,” said Svitolina who will face either No. 1 Simona Halep or Maria Sharapova in the final on Sunday.