Svitolina fights back to set up last eight clash against Kerber

Defending champion Elina Svitolina survived a scare to triumph 0-6 6-3 6-2 over Daria Kasatkina and book a quarterfinal meeting with Angelique Kerber, who eased past Maria Sakkari for the loss of just two games. 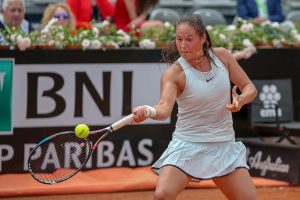 Svitolina won just seven points in a distinctly one-sided first set during which she lacked intensity and seemed unsettled by an early tumble. She lost nine of the first 11 games before finding her feet and beginning to show glimmers of the kind of tennis which took her to the title at the Internazionali BNL d’Italia last year.

From 0-6 2-3 down she won the next three games to claim the second set and force a decider. The Russian broke to lead 2-1 in the third but that was the last game she was to win as the No. 4 seed reeled off five straight games and looked visibly relieved as she clinched victory.

Svitolina’s opponent in the last eight will be No. 11 seed Angelique Kerber, who needed just 55 minutes to chalk up a 6-1 6-1 win over Greece’s Maria Sakkari.

World No. 1 Simona Halep also advanced after her third round opponent, Madison Keys, gave a walkover due to a right rib injury. The Romanian will face either No. 7 seed Caroline Garcia or No. 9 seed Sloane Stephens in the quarterfinals.