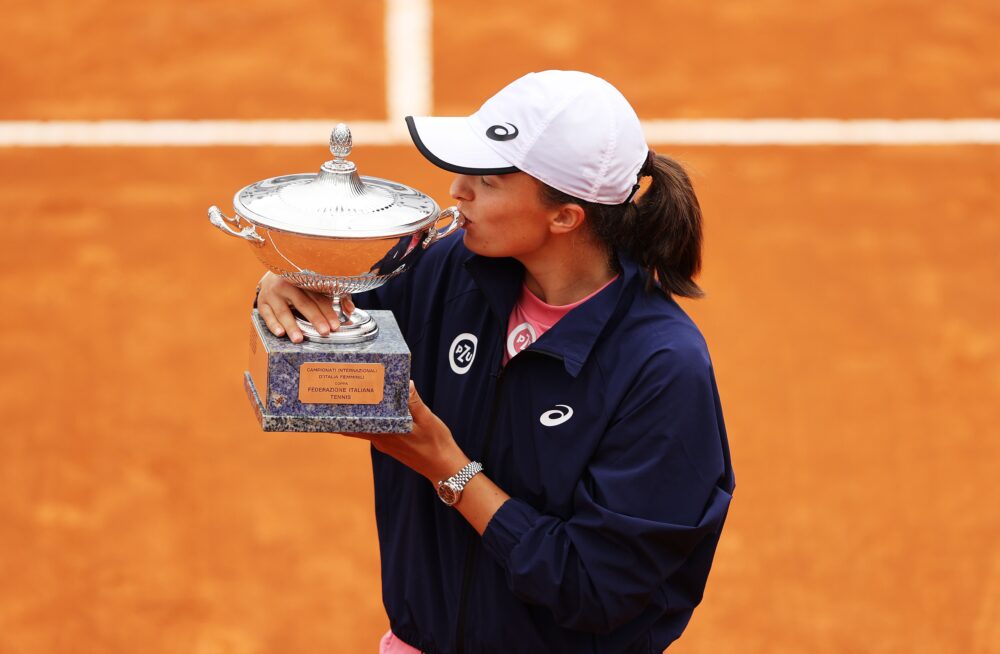 In the most one-sided final of the WTA 1000 of Rome, Iga Swiatek left no game to Karolina Pliskova to lift the trophy of the Internazionali BNL d’Italia 2021. The teenage became the first Pole to ever win the tournament.

Swiatek started the match like a fury, with a perfect tactical approach of moving her opponent with deep and angled shots, managing to take control of the rallies immediately from her serve and even on return. Pliskova, on the other side, had no answer to that surprising start of her rival and her serve deserted her immediately. Whenever she tried to go for winners, her shots would not land inside the court, while Swiatek would take advantage of any shorter ball.

With 17 winners and only 5 errors, the Roland Garros champion dominated the match, which only lasted 45 minutes. Pliskova had chances to move her score only in two games, once during the the final one, but in the end it was a double 6-0 for the Pole.

“It definitely was not my best day today,” admitted with a sad smile Pliskova at the end of the match: “but Iga played great so congrats to her and her team. Sometimes you have days like these in tennis, when things just don’t go your way and though I tried my best it was not the case. I still played some great tennis this week, so I will try to forget about today as quickly as possible”.

Indeed, Pliskova managed to overturn some difficult days and deservedly had reached this final, the third consecutively at the Foro Italico. But today, it was all about her young rival.

“At the beginning of this week I would have never dreamt of winning this tournament”, said Swiatek who could barely find the words to describe her. Among the numerous people she wanted to ask, though, she did not forget to mention her cat.

“It’s not easy to actually win the first set 6-0”, admitted the Pole: “because you always have in the back of the mind that your opponent may start playing better and they can change the tactics completely, and then you have to adjust and then you’re going to start worrying. So, when I was on the breaks, I was visualizing that I’m starting that match from the beginning every time. Actually, I did that so well that I didn’t even know that it was 6-0 in the first set. So that was kind of funny, because I asked my coach what was the score after the match. Yeah, I think mentally I was really in good shape today”.

Not only the second biggest title in her career, but her winning run in Rome will also give her a first time entrance to the top 10. For her, this was a much sought after goal since winning the Roland Garros.

“It is pretty crazy and I’m really proud of myself that I’m actually starting to be more consistent, because that was my goal from the beginning. Actually, I feel right now that I am doing huge progress in that matter. But it was actually a bit frustrating after French Open, because sometimes you can’t, you know, see the result of your work. Obviously winning a Grand Slam is great, but after that comes rankings, and this year it was different. So I’m really proud that I’m gonna have, you know, in my résumé that I’m top 10, because I always wanted that. Yeah, I also want to be consistent. So right now our goal is to, you know, keep me in that place and go further”.

Having found consistency and great form in Rome, all other women will have to be ready when they arrive in Paris, because the defending champion looks like she is.