Marketa Vondrousova rallied from a set down to upset last year’s finalist Simona Halep and advance to the third round on her debut appearance at the Internazionali BNL d’Italia.

It was the second time this year that Vondrousova had got the better of the Romanian, having also achieved the feat at Miami, and means the lefthander will now play Daria Kasatkina for a spot in the last eight.

The Czech teenager struggled to find her form in the opener, losing four straight games to hand Halep the first set 6-2 but raised her level from then on. Using the drop shot to great effect, the world No. 44 twice moved a break up in the second only to be pegged straight back but the twelfth game offered up two more opportunities to break and she duly took the second to level the score at a set all. A single break of serve in the eighth game of the third was all that was required to complete the shock 2-6 7-5 6-3 victory and send the reigning Roland Garros champion packing.

“I just play great match, I think. I was just really enjoying myself out there. The crowd was amazing. I’m just very happy with the win,” said Vondrousova.

Another seed to exit the Foro Italico on Thursday was No. 9 seed Marin Cilic, a semi-finalist here last year, who fell 6-2 6-3 to Jan-Lennard Struff. The German was impressive on serve as he turned the tables on Cilic, who had defeated him last week in Madrid, and secured a place in the third round against No. 6 seed Kei Nishikori. 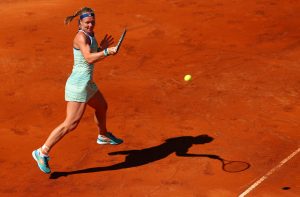 Madrid champion Kiki Bertens narrowly escaped with the victory in her second round match against lucky loser Amanda Anisimova. It looked like being plain sailing for the Dutchwoman as she eased a set and a double break up but the American teenager had other ideas, playing a period of near flawless tennis to level the score and then push Bertens all the way in the third.

“It was really tough. I would say first set 6-2 my side, but I think it was much closer than the score look like. In the second set, I was a break up, but then she started to play better. I was still searching a little bit for my game. In the end it was just a big fight. I’m just happy I managed to win,” said the No. 6 seed who will now face Carla Suarez Navarro.

The drama continued on Court 3 when Australia’s Nick Kyrgios was defaulted from his match against qualifier Casper Ruud for kicking a bottle, throwing a chair and then leaving the court.