Wawrinka returns to action against Johnson

Stan Wawrinka, who has not played a competitive match since February, will return to the ATP Tour on Sunday when he takes to Court Centrale for his first round match against Steve Johnson.

The 33-year-old Swiss player retired in his opening round match in Marseille and subsequently withdrew from the Masters events in Indian Wells and Miami in order to fully recover from the right knee surgery he underwent in August 2017. While he had hoped to make his comeback at the Madrid Masters, a calf injury sustained in training set him back 10 days and the decision was made to postpone his return until the Internazionali BNL d’Italia.

Johnson, meanwhile, arrives at the Foro Italico on a five-match winning streak having successfully defended his title at Houston last month and will be hoping his form continues on Sunday as he attempts to defeat Wawrinka for the first time. 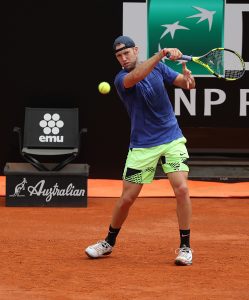 Americans Sam Querrey, Jack Sock and Ryan Harrison are also in first round action on Sunday. No. 12 seed Querrey opens his campaign against Peter Gojowczyk, a last minute replacement for Milos Raonic, on Next Gen Arena, while No. 13 seed Sock will face a tricky opening encounter when he meets David Ferrer, a former Roland Garros finalist, in the last match on Court Centrale. Harrison will play Japan’s Yuichi Sugita in his first main draw appearance at the Foro Italico since 2015.

The only other main draw match scheduled on Sunday is one for the home fans as Italian wild card Lorenzo Sonego takes on Adrian Mannarino in the first match on Court Centrale.

The women’s event starts on Monday while the final round of qualifying will be completed on Sunday.