Venus Williams defeated No. 5 seed Johanna Konta 61 36 61 as their match went the distance on Centre Court at the Foro Italico on Thursday.

The American was in flying form in the opener, recording a double break to edge ahead and gain the early advantage. While her level remained high in the second set it was Konta who came through a tough eighth game with a break of serve and then held on to force a decider. Williams responded by raising the intensity once again and securing a double break to get the win. 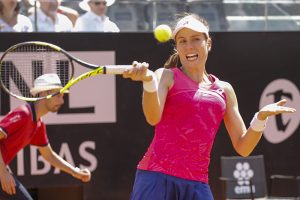 “In the first set I was happy to have been able to close it out with a double break,” said the No. 9 seed, who had lost her last three matches against the Brit. “In the second set, it was like sometimes I felt like there were moments where I had a chance and she would have a strong hold and it was just one break. And in the second, I just kind of felt like I want to do the right things out here. It was really a moment of that.”

Williams will face No. 3 seed Garbine Muguruza in the quarterfinals in the Friday’s night match after the Spaniard backed up Wednesday’s victory over Jelena Ostapenko with a straight sets triumph over Julia Goerges.

While the 75 64 scoreline may look straightforward, the match was much tougher than that suggests and Muguruza had to rally from 4-1 down in the second second to book her spot in the last eight.

“I think it was a good match, honestly. It had a little bit of everything. A very tight first set. A comeback in the second set,” said Muguruza.

“She’s a very aggressive player and a big serve. Sometimes, you know, she went far in the score like in the second set, but I was kind of, like, waiting. I knew I would have my opportunities later. I didn’t really panic on that. But I’m happy to be able to come down from 4-1 and after play good and win 6-4.”

Karolina Pliskova made light work of Timea Bacsinszky in the last match of the day. The tall Czech raced to a 5-0 lead in the opening set before serving it out comfortably. Bacsinszky put up more of a fight in the second but the No. 2 seed was too good, breaking in the 11th game of the set before wrapping up a 61 75 victory.

Pliskova will face Elina Svitolina in the last eight after the Ukrainian No. 8 seed stormed back from losing the opening set against qualifier Mona Barthel to win her third round match 36 60 60.