Alexander Zverev proved too good for John Isner at the Internazionali BNL d’Italia on Saturday, putting in a convincing performance to defeat the American 64 67(5) 61 and book himself a spot in his maiden Masters-1000 final.

Zverev was cool, calm and collected as he produced a clinical display of tennis against the world No. 24 to become the youngest player to reach the last two at a Masters-1000 event for a decade. 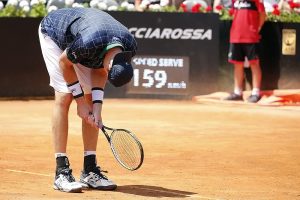 The German cruised to the first set in under half an hour, sealing a break for 3-2 and never looking back. The second set was much closer with neither player having a break point but a lapse of concentration at the start of the tiebreaker cost the No. 16 seed the set as Isner raced to a 5-0 lead and then levelled proceedings with a forehand winner.

Zverev responded well, breaking in the opening game of the third and remaining focused to come through a tricky game at 3-1 where his opponent had three break points. He looked comfortable as the match progressed, running out victorious in just under two hours.

“I’m into my first final of a Masters Series, which is great, and especially on clay. You know, on clay it’s a very physical game and it’s very tough points all the time, long points, you know, even though I played John just now which are probably the shortest points you’ll get against someone on a clay court,” said Zverev.

He will face either Novak Djokovic or Dominic Thiem, who play their semifinal on Saturday evening, in Sunday’s final.